Well, sort of. I have started the last issue of THE DEADBEAT. It looks like I'll actually be able to see this thing through to the end. I know where I'm going with it and I know what's on the last page. All I have to do is get there. With this going on, having a job with particularly strange hours, and playing music, I've decided sleep pretty much won't be an option for a while. I'll be in a wonderful mood...HEY GO SEE THE BENWAYS LIVE!!
Posted by Massie at 6:39 AM No comments:

Pages From The DEADBEAT #2

Pages from Issue #2 of my comic. Sequences like this are what made it take so long to fucking finish.
Posted by Massie at 3:13 PM No comments:

I just finished Issue #2 of the deadbeat. Shit...one more to go.
Posted by Massie at 8:38 AM No comments:

I've been to two conventions and one concert since my last post. Knoxville's Adventure Con kind of sucked. It was geared more towards people who wanted to meet 'sort of celebrities.' Like the guy who played Boba Fett or some aging actress that was on Buck Rogers thirty years ago. Comics weren't the main focus of the show. Indy comics weren't represented at all. But I did manage to find some great books for five bucks a piece: The Surrogates was a definite standout. Kind of a departure as far as what Top Shelf Comix publishes but It was an amazing read. Good Sci Fi is hard to find. I was really surprised by it.
A week or so after that con I drove to Ohio to see Wilco. There new album, Sky Blue Sky, was stripped down and really comforting in a way. The band's previous releases, while all sounding different in their own right, usually delved into some noisy atmospheric territory. This sort of thing is wholly absent from their new release. A very laid back show. Their new line up of seasoned musicians was quite a sound to behold. Jeff Tweedy's voice was in rare form. Very good gig.
Two days later my tired ass decided to get in the car again and go to the Heroes Convention in Charlotte. Top Shelf was there and lots of other great folks in the INDY ISLAND section of the convention. I picked up a shit load of books I haven't read yet and traded lots of minis. This is consistently one of the best conventions around as far as representing the full spectrum of what's out there in comic book world. Great fucking weekend!!! Wilco, Comics, but alas Monday came along as did............my Job. FUCK!
Posted by Massie at 12:09 PM No comments:

Going to Knoxville This Weekend

I'm going to a convention this weekend. I plan on going to every one I can find that is in a reasonable driving distance. This one doesn't look promising but who knows maybe some cool people will be there. I'm taking copies of the first issue of THE DEADBEAT. T-bone, and Steve will be my traveling companions...Hopefully no one will die as a result of repressed homo-erotic rage. They have a weird relationship.
Posted by Massie at 6:15 AM No comments:

I just read 'The Salon' by Nick Bertozzi. I have been following him for a while. I really enjoyed 'The Masochists' and couldn't wait to read this new book. I first discovered it on Serializer and really dug it. It's a murder mystery set against the backdrop of the modernist painting movement and the birth of Cubism that went down in Paris. Lots of Absinthe drinking and fun times. The main characters include the Steins, Picasso, and Braque. Amazing artwork in this thing and the color choices in this thing are genius. Now I have to read the book Bertozzi did with Jason Lutes about Houdini.
Posted by Massie at 7:57 AM No comments: 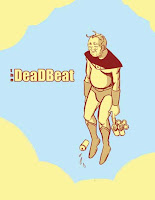 EWWWWWWW look at my cover.
Posted by Massie at 7:04 AM No comments:

Hello, I make Comic books.
Posted by Massie at 6:56 AM No comments: