I found out yesterday The Deadbeat is going to be in the March issue of Previews. Everyone make sure you order!! With diamond's new 'benchmarks' set. I have to sell out the ass to stay in. I'm not freaked out...No not me.
Posted by Massie at 3:03 PM 2 comments:

Attack of the Alterna Zombies!!

The company who is publishing my book is releasing a comic for FREE COMIC BOOK DAY. It has previews of all their titles. I imagine I'll be in it. That is rad. Tell your local comic store to order one. It will be in Previews soon. Yep!
Posted by Massie at 5:44 AM No comments:

Hello, my name is Jeremy Massie, and I'm addicted to Jack Kirby's Fourth World books. Back in the early seventies Kirby jumped the Marvel ship, and went across town to work for DC. He started his Epic in an established book Superman's Pal Jimmy Olsen. He then started up three new titles: The Forever People, The New Gods, and Mister Miracle...where he fleshed out his epic further. DC has released the 'Fourth World Omnibus' collecting these books in order of their release. I am addicted to this stuff!! I'm familiar with Kirby's Marvel work, but have never gotten into the DC stuff before. As far as early Marvel goes I was more of a Ditko fan. I liked Kirby but, Ditko was always more interesting to me. This Fourth World stufff has me hooked. I can't stop reading it...My social life is gone. My mind is blown. I want a boom tube so I can cut down on travel time.
Posted by Massie at 8:19 AM No comments: 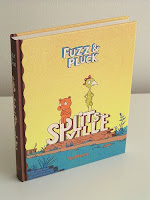 So, I've thought about it. My favorite book I read last year was Fuzz & Pluck: Splitsville by Ted Stearn. I really liked the first book and this new chapter in the lives of the plucked chicken and teddy bear duo really takes the story to a whole new level. Stearn was a teacher when I was majoring in comics at SCAD. My pals and I learned a lot from him, if you read this book you'll know why. It feels like an old animal strip from back in the day but the story structure sticks to the longer graphic novel format. Good stuff. Great characters. Anyhoo, it's worth the cover price for sure.
Posted by Massie at 7:25 AM 7 comments: